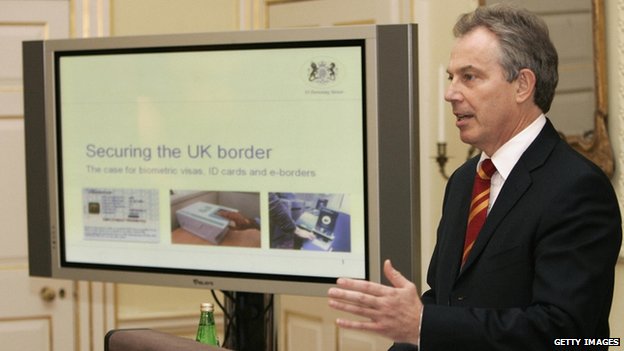 The Home Office has been told to pay £224m to a major US corporation it sacked for failing to deliver a controversial secure borders programme.

Ministers will pay Raytheon £50m in damages, plus other costs.

The order to make the payments comes from a binding arbitration tribunal. Home Affairs Committee chairman Keith Vaz called it a catastrophic result

The e-Borders programme launched by Labour in 2003 was a £1bn attempt to reform border controls.

In 2007 Raytheon won a nine-year contract for the programme.

Three years later, the coalition government terminated the contract with the US defence corporation, after claiming it was failing.

It said it had lost confidence in Raytheon to deliver the programme after it fell a year behind schedule.

Raytheon threatened to sue ministers for £500m, blaming the UK Border Agency for the failings, before the two sides entered into binding arbitration to reach a settlement.

In its ruling, the arbitration tribunal did not pass judgement on whether Raytheon had failed to meet its contractual obligations – but it criticised UKBA officials for failing to properly brief the home secretary on whether the company had an arguable case to hold on to the deal.

The full ruling has not been made public, but the tribunal said the Home Office should make the following payments to Raytheon:

In a letter to the chairman of the cross-party Home Affairs Committee, Home Secretary Theresa May says The government stands by the decision to end the e-Borders contract with Raytheon. This decision was, and remains, the most appropriate action to address the well-documented issues with the delivery and management of the programme

The situation the government inherited was therefore a mess with no attractive options. All other alternatives available to the government would have led to greater costs than the result of this Tribunal ruling

Mrs May is writing to the National Audit Office to ask it review how the e-borders scheme was managed from its inception.

The Home Office’s permanent secretary Mark Sedwill will also investigate the advice that senior immigration officials gave to ministers when the decision was taken terminate the contract.

In a statement to the New York Stock Exchange, Raytheon said: “The arbitration tribunal found that the Home Office had unlawfully terminated [the company] for default in 2010 and therefore had repudiated the e-borders contract.

The Tribunal denied all Home Office claims for damages and clawback of previous payments. The Tribunal’s ruling confirms that [Raytheon] delivered substantial capabilities to the UK Home Office under the e-borders program

Mr Vaz, a Labour MP, said: This is a catastrophic result. Minister after minister and successive heads of the UKBA told the select committee that the government was the innocent party and that Raytheon had failed to deliver.

He added: It is now clear that the UKBA didn’t know what they wanted from the e-Borders programme

Mr Vaz also said: It is important that those who have responsibility should be held to account for failing the taxpayer in such a costly way

A new version of the e-borders programme is still being developed, although one of its key functions advanced checks on arriving passengers  is already partially in operation. The original plan had been for the system to be fully operational by March of this year