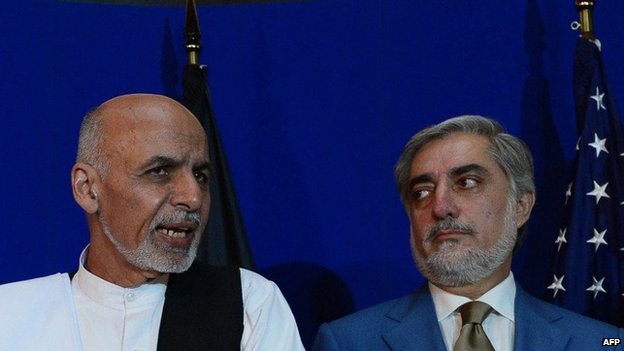 Afghan presidential candidate Abdullah Abdullah has withdrawn observers from an audit of votes in the disputed election, citing concerns over fraud.

The UN-supervised audit to find a successor to Hamid Karzai has been suspended for now, officials say.

Both Mr Abdullah and his rival Ashraf Ghani have claimed victory and both have alleged widespread fraud.

The two candidates have agreed to form a government of national unity but have so far failed to reach a deal.

Auditing all eight million votes cast began a month ago and could take weeks to complete.

A UN spokesman in Kabul confirmed there was a temporary pause in the process, but did anticipate significant disruption, the Associated Press reports

Mr Abdullah was the frontrunner in the first round in April but did not secure an outright majority.

Preliminary results after a second round in June put Mr Ghani ahead.

Mr Abdullah’s team is now demanding that hundreds of thousands of what they call fraudulent ballots should be thrown out.

Some of his supporters have threatened to stage major street protests, and the BBC’s David Loyn in Kabul says it feels a very dangerous moment in Afghanistan

The Abdullah team said they would boycott the audit when it moved into its final stage this week, and only a few ballot boxes were thrown out

UN officials held late night meetings with both teams to keep the process going – and it is clear that the audit will go on, with or without Mr Abdullah’s observers, our correspondent says

Talks are ongoing with the UN. If that reaches an agreement, we will come back. If not, that is the end of it Abdullah spokesman Fazel Aqa Hussain Sancharaki told AFP news agency

But a member of Mr Ghani’s team said the Abdullah camp “know they have lost the election and… are trying to make excuses”.

Ahead in mainly Tajik northern areas

Has support of Qayyum Karzai, brother of President Karzai

The malaria mines of Venezuela