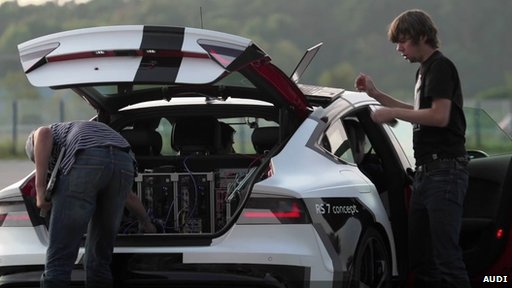 WATCH: The RS7 took a little over two minutes to complete a lap (video filmed by Audi and edited by BBC)

Audi has claimed a speed record for a self-driving car.

The car took just over two minutes to complete a lap of the Grand Prix track.

Sunday’s stunt was organised to highlight the firm’s efforts to bring “piloted driving” to road vehicles. But one expert cautioned that several hurdles still needed to be overcome.

Audi – a division of Volkswagen – also put a human behind the wheel of the vehicle for a comparison lap. He took five seconds longer to complete the circuit.

A member of the car company’s research team explained that it believed the innovation could ultimately be used by the public.

“I know accident-free driving will remain a vision. But at least we can reduce the number of accidents in the future,” said Dr Horst Glaser.

“Piloted driving defuses situations like, for example, being in a traffic jam. Whenever the driver is distracted and inattentive the car could take over.

“Additionally the driver has a chance to relax. That means they are on full alert as soon as their attention is required again.”

The RS7 used a combination of cameras, laser scanners, GPS location data, radio transmissions and radar sensors to guide itself around the track, with the data processed by computing equipment that filled its boot.

The experiment marked a high point after 15 years of research by the firm in the US and Europe.

However, one industry-watcher noted that a speed test on an otherwise empty racetrack was very different to the day-to-day driving conditions such vehicles would one day experience.

“I think we will see driverless cars on our roads within a decade, but there’s clearly still a lot of work to do,” said Prof David Bailey from Aston Business School.

He added that the insurance industry also needed to grapple with the concept.

“One of the big issues is what happens if there is an accident,” he explained.

“Who is responsible? Is it the driver even if they are not driving? Is it the car company? Is it the software company? There are a whole load of legal issues to sort out.

“But there could be big savings for the economy in terms of far fewer accidents and more efficient travel.”

Audi is far from alone in this field research.

Another German manufacturer, Mercedes, showed off a rival computer-controlled version of its S-class car recently.

Other car companies including Daimler, Volvo, Toyota, Tesla and BMW are also experimenting with artificial intelligence-directed vehicles, as are other tech firms including Google, Panasonic and Autolive.

Shares rally in Europe and the US