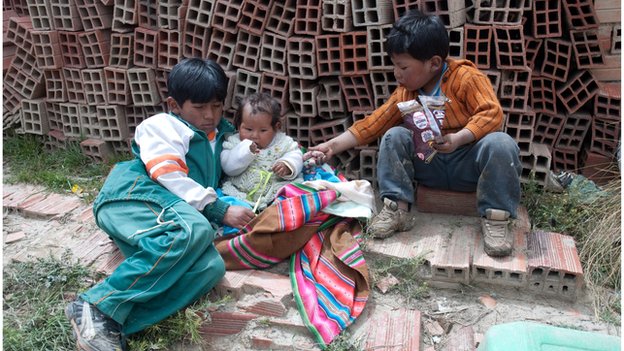 For nine-year-old Samuel Juan Ramos Gomez, brick making is part of everyday life. When he has finished school for the day, he puts down his pencil and picks up a shovel, helping his parents in the small brick factory at the back of his house

The new bill kept the official minimum working age at 14, in line with international labour conventions in developing countries

But it introduced two exceptions. For children aged between 10 and 12, work is allowed if they attend school, are self-employed and get parental permission. And from 12, children can do light work for others – mining and brick making are not considered light work.

In all cases, the work needs to be authorised and registered with a child protection officer

We know the realities of Bolivia says Katarina Johansson Mekoulou, the deputy representative of Unicef in Bolivia However, these two exemptions to the minimum age are of great concern to us because we see this as a risk – the most vulnerable children will be at risk of abuse.

The International Labour Organization (ILO) argues that child labour should not be justified as a necessary evil, nor as a development strategy, but sponsors of the bill disagree. They say this law addresses Bolivia’s needs and is part of a plan to eradicate extreme poverty by 2025

A step back would be turning a blind eye to the reality for the boys and girls who work says the politician Javier Zavaleta, who was one of the sponsors of the new bill

Any man or woman from a developed country who walks around the poorest neighbourhoods of Bolivia will see things that they’ll never understand because poverty is really extreme in some parts in Bolivia.

Back in Alpacoma, I met Maria Rosminda Quispe, who runs a centre offering families healthcare and educational facilities. Whether it is little boys helping in the brickworks or little girls looking after their younger siblings while their parents work, all forms of child labour are problematic, she says.

A child begins to lose his innocence and starts to assume an attitude of an adult she says. Physically, their growth speeds up, they have wider shoulders, more calluses on their hands and they end up having the profile of an adult.

And then of course we have the social issues, the relationships. Those children find it hard to be with their peers who don’t work. They look for people who are older than them.

For her, the law it is not a way out of poverty

Many parents and mothers are going to decide that they can work or the child will feel that the law is supporting him, she says. But we aren’t considering the consequences that it will have on the life of the child Laws tell you one thing, but reality is another

Brian, a 14 year old who comes to the centre to do homework every day, is an example of that reality

He has been making bricks with his family for as long as he can remember, putting in up to five hours a day. He would prefer to study if he had a choice

He wants to be an architect and his parents support him. But how to pay for his education? Make more bricks, he says

It is a vicious circle for many children in Bolivia