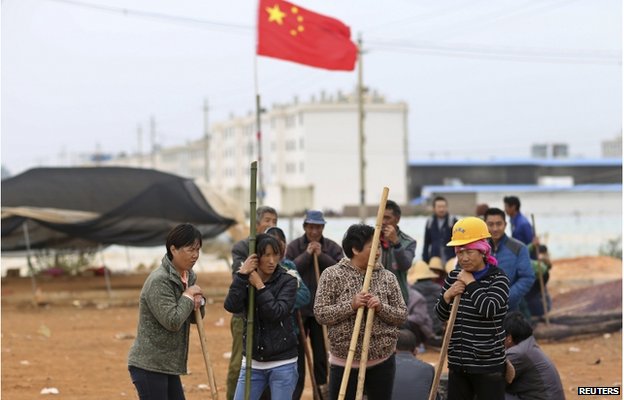 Chinese authorities have arrested an official and punished 16 others following a deadly clash earlier this month in Yunnan, state media say.

Eight people died, including four construction workers who were burnt to death, and 18 others were injured in the violence in Fuyou village.

Villagers were reportedly unhappy about a land deal involving the construction of a trade and logistics centre.

The arrested official was the village chief who state media said took bribes.

There have been several high-profile village clashes over land deals in recent years amid rapid development.

All land in China is state-owned and farmers often have little say when state-appointed local officials sell off large tracts of land to developers, some pocketing bribes in the process and paying inadequate compensation to villagers forced to relocate.

Xinhua news agency said that following the 14 October incident, authorities undertook an “in-depth investigation” of local officials, which included some involved in the Pan-Asia Trade and Logistics Centre project.

It found that 16 of them had “shirked their responsibilities and did not adequately resolve problems that had been forcefully pointed out by the people, resulting in serious and terrible consequences”.

Six of them had either been suspended or fired, while the others were “still being dealt with”.

Xinhua named the arrested official as Li Jiaming, the chief of Fuyou village council, who had “received bribes several times during the project’s construction”.

Villagers had told local media they were unhappy with the amount of compensation and the developer had refused to show them proof of approval.

They also claimed their only road in and out of the village had been sold to the developer.

Hundreds were reportedly involved in the clash. Authorities have said they will “harshly punish” those who took part in the violence.

At local level, land disputes often result in violence because villagers do not trust the law to protect them.

The most high-profile dispute erupted in the village of Wukan in 2011, when villages threw officials out of the town.

Since President Xi Jinping took office in 2012, China has embarked on an anti-corruption drive aimed at not only catching high-level officials but also those in the lower ranks.