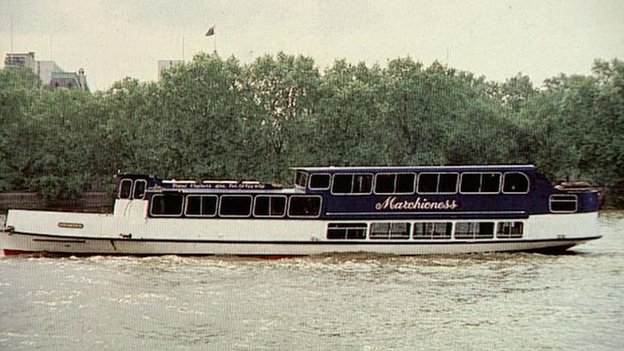 More than 130 partygoers were on board the Marchioness pleasure boat on the evening of 20 August, 1989

On a hot, late summer evening in 1989, the Marchioness pleasure boat, packed with more than 130 partygoers, collided with the dredger Bowbelle and sank in the River Thames, killing 51 people. Twenty five years on, survivors and victims’ families recall what happened and the legacy that remains

Model Simon Senior, who was 20-years-old, was also on board.

Mr Senior modelled for ID magazine, lived with his girlfriend on west London’s trendy King’s Road and played bass guitar in a band.

He was creative, artistic and had an amazing sense of humour says his mother Judy Wellington. He just cut to the chase and made you laugh in seconds

He had this need to be successful. There weren’t many black models and he just wanted to be the best

On board the Marchioness, Mr Senior was with a girl on the dance floor but when the craft crashed they were thrown apart.

Fate was also against them that night his mother recalls

Mr Philpott had also managed to escape from the vessel into the river.

I saw an empty barrel of beer coming towards me and grabbed hold of it, then got a few other people to hold on he said

The group struggled over to another party boat, were pulled onboard and transferred to Westminster Pier before being taken to hospital.

But Mr Philpott’s friends and girlfriend had been onboard. I probably spent a month going to friends funerals he said

All I kept thinking was my child is somewhere but I couldn’t reach him she said. I couldn’t eat or sleep and when I did sleep, I’d wake up and that feeling of pain would come back inside of me

Then I started to realise he was not coming back

A few days later, a body matching Mr Senior’s description was found in the river near HMS Belfast

Losing him tore out my heart she said. My world fell apart I felt helpless, went into shock and couldn’t move

As if the pain of mourning friends was not bad enough, the months and years that followed the tragedy were to test the survivors and victims’ families even more

Ms Wellington said of her son: He was a brilliant musician. It’s unbearable to think they cut his hand off, but nothing was said about it

Many families threw their efforts into improving safety on the river, frustrated at what they regarded as a lack of government commitment to the issue.

Margaret Lockwood Croft, whose son Shaun, 26, also died in the disaster, was one of the the Marchioness Action Group’s founding members.

She proudly lists just some of the achievements of the group’s campaigning: the introduction of lifeboats on the River Thames in 2001, new laws on being in charge of vessels under the influence of alcohol, and training for police family liaison officers.

A lot of legacies have come out of the Marchioness disaster so those 51 people, I’m sure in their place of comfort, they are proud something has come out of their deaths, she said.

Over the years I have decided everything I do, has to be in Simon’s memory,” she said. “In his 20 small years, he had so much desire to do something to change.”

After he died, she went to college, gained a degree, then did teacher training and set up a language school.

She now runs the school and works with young people in community development.

“I changed my life so I could take him with me,” she said. “I feel his legacy has lived on.”

The malaria mines of Venezuela