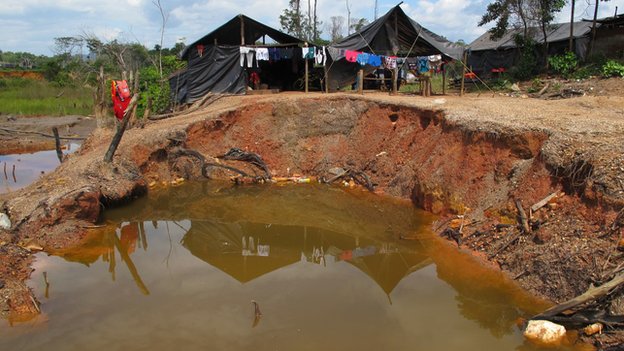 Venezuela used to be a world leader in managing malaria, but is now the only country in Latin America where incidence of the disease is increasing. Around 75,000 people were infected last year, and according to government figures, 60% of cases were in Sifontes, a tiny region of the country where gold mining – where workers drill for gold in mosquito-friendly standing water – is booming, and healthcare is scarce.

But in the past 20 years, thousands of miners have come from all over the continent, generating an environmental impact that helps the mosquitoes breed.

Most don’t have permits to work  or even remain in the country, causing an over population in a remote region were the access to healthcare was already scarce. Local centres don’t have the capacity to cope with all the patients

It is the surge of malaria cases in Bolivar that puts the whole country at risk, says Jose Felix Oletta, a former Health Minister who is now director of Red Defendamos la Epidemiologia

Because of it, says Oletta, there are other endemic regions where the mosquito can thrive again

So far this year, this country of 30m people has registered more than 45,000 cases of malaria, according to government statistics.

In the wild state of Bolivar, the municipality of Sifontes is the ground zero of the malaria surge.

The environmental impact of mining has, as locals put it, made mosquitoes angry

However, the mosquitoes are not the ones to blame. The boom of illegal mines means more people eroding the rainforest, cutting trees and creating stagnant waters to extract gold. A perfect breeding grounds for mosquitoes.

Here, residents work either as miners, or as service providers to those who risk their lives at the mine.

There are shops around every corner where miners sell their gold, as well as pool bars and motels.

There is also a brand new government hospital, where every morning hundreds of ill-looking people queue to get tested for malaria.

Those who test positive receive a seven day treatment, paid for by the government, which includes rehydration drinks to combat vomiting and diarrhoea, and pills that target the specific malaria parasite they’ve been infected with  vivax or falpicarum

Around 70% of the cases in Sifontes are vivax and the rest are falciparum says Jorge Moreno, an entomologist who coordinates malaria research for the Bolivar’s Health Ministry.

Vivax is not fatal but has the strongest symptoms, whereas falciparum goes unnoticed but can suddenly kill you

One of the hospital’s six doctors is Ralph Brown, who comes from one of the dozens of indigenous communities in the region.

The problem is that only two days after feeling okay, patients abandon the treatment, he says

Then they start drinking, partying, they don’t eat well, they have sex he says.

Many of the patients in Sifontes, however, complain that they don’t always get adequate treatment – shortages of medicine all over the country are one of the effects of Venezuela’s current economic crisis and this hospital is not an exception.

However, proper treatment is essential for controlling malaria.

Visiting the mine where Jesus works, it’s easy to see how mosquitoes thrive here in the humidity, wildlife and mud.

The miners drill for gold in large pools of stagnant water. They often sleep right next to the mine, in sheds made of black plastic bags, with zinc sheeting for roofs.

There’s garbage, and stagnant, black waters surrounding just outside every tent. When the motors from the mine are off, you can hear the mosquitoes buzz in your ear.

I have a mosquito net, says Jesus, as he shows me the hammock where he sleeps.

But that doesn’t really avoid the bite, as you can get it any time

Doctors say the best way to protect yourself from malaria is to use repellent, cover up and stay inside at dawn and dusk advice Jesus and his fellow miners largely ignore.

The mining conditions, poor infrastructure, and ever swelling numbers of people for mosquitoes to feast on, have created perfect conditions for malaria to spread

Dr Armando Ortega, director of environmental health at the Institute of Public Health in Bolivar, and responsible for controlling malaria in the state, told the BBC Environmental conditions like rainfall, humidity and hydrostatic pressure make the mosquito well adapted to the region

But human intervention has played a major role in the surge of malaria here, he adds

This is one of the biggest gold reserves in the world, which means that many people have migrated here from many parts of Latin America to become richer

We try to control the mosquitoes with fumigation, we give out insecticide treated mosquito nets, and we have quick diagnosis and treatment programs

Jose Felix Oletta was Health Minister in the 1990s, with the government party Copei which is today part of the opposition

As the gold price goes up, so does malaria

We’re going backwards, and malaria threatens to spread to regions where the disease had been eradicated

They’ve been in power for the last 15 years, have stopped spending in health, and permitted illegality all over the country and at every level

Nonetheless, both critics and government agree that it’s the hunt for gold that causes malaria

As Dr Ortega puts it, as the gold price goes up, so does malaria

Related Topics:
Up Next