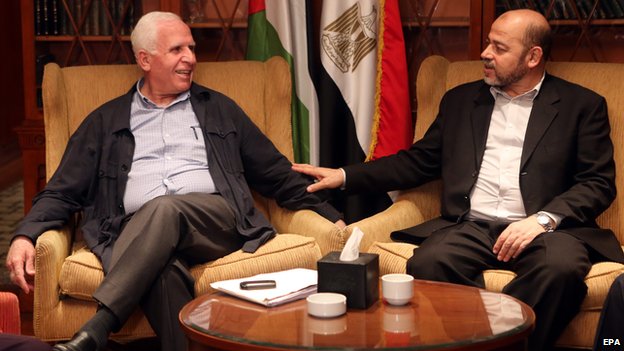 Palestinian negotiators in Cairo say they have agreed a comprehensive deal for a national unity government to take responsibility for running Gaza.

A cabinet backed by Hamas and Fatah, which dominates the Palestinian Authority, was unveiled in June

But the move was eclipsed by Israel’s conflict with militant groups in Gaza.

The territory has been governed by Hamas, which won the last parliamentary elections in 2006, since it ousted forces loyal to the PA in 2007.

The PA was left to run parts of the occupied West Bank not under Israeli control.

Earlier this month, PA President and Fatah leader Mahmoud Abbas accused Hamas of operating a shadow government in Gaza. Hamas denied the claim, calling it against the reality

The BBC’s Kevin Connolly in Jerusalem says bringing unity between Hamas and Fatah is a strategic aspiration for the Palestinians – but differences between the factions are bitter and profound.

The new deal is described as comprehensive, but not enough detail is being published to allow a real judgement on its prospects, our correspondent adds

The terms of the ceasefire between Israel and Hamas that ended the 50-day Gaza conflict on 26 August require a Palestinian Authority presence in the territory.

Hamas had to accept those terms in return for the promise of help with reconstruction.

However, a Hamas official told the Associated Press that there were still disagreements over who should be responsible for paying civil servants in Gaza, and whether the PA’s own security forces would be allowed a significant presence in the territory. He described the deal as partial

Our correspondent says Egypt and the many Western governments that help support the PA would like to enhance the unity government’s influence in Gaza, but they will now have to wait and see if a deal which has been agreed in theory can be applied in practice

The development comes ahead of negotiations between Israeli and the Palestinians in Cairo on the second stage of last month’s ceasefire deal.

More than 2,100 Palestinians, most of them civilians, were killed in the fighting, along with 66 Israeli soldiers and seven civilians in Israel.

Shares rally in Europe and the US