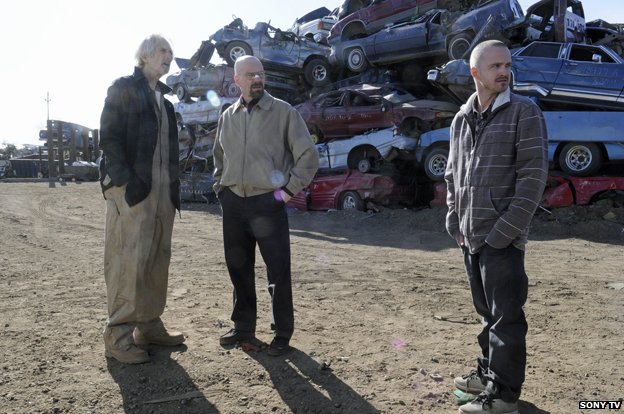 Scrapyards are invariably portrayed on screen as dens of villainy and vice. Why?

Whenever I tell people my family has a scrapyard, I usually get one of three responses

So, have they ever put anyone in the crusher? Are they armed robbers? or a look somewhere between shock and fear.

While these presumptions amuse and annoy me in equal measure, the stereotype seems to be consistent across the scrap spectrum. Whether it’s a car breaker’s, a junk yard, or a scrap metal yard, the whole industry seems to have a very bad reputation.

It would, of course, be foolish to deny there are some rogue traders in the business. The recent and well-reported surge of metal thefts has only underlined there are yards that don’t operate within the law.

By buying scrap metal “no questions asked”, some dealers have helped to fuel a crime wave that has plundered the UK’s railway cables, copper roofs, sculptures and anything else metal that can fit on the back of a wagon.

But the public image of the trade had a big question mark over it well before this, and I can’t help but think TV and film have played a leading role in manoeuvring it there. Who hasn’t seen a villainous depiction of a scrap dealer on TV?

The stars of The Sweeney and Minder, two of the biggest British shows of the 1970s and 1980s, regularly had it out with dodgy scrap men, scuffling between stacks of battered Vauxhall Vivas and Ford Cortinas.

What about Steptoe and Son? Has there been a grimmer and more grasping pair on TV than these two rag and bone men?

Current BBC shows including Inspector George Gently and New Tricks have both had murder investigations focus on scrap dealers.

In the US TV series Breaking Bad, Old Joe helps the drug-dealing main characters outwit law enforcers on more than one occasion.

Mafia drama The Sopranos has referenced crushers as a body disposal tool, and the CSI franchise loves a good scrapyard storyline too. If they’re not turning up corpses, they are “helping with enquiries”.

And from Goldfinger to Pulp Fiction, everyone must have seen at least one movie in which some body – dead or alive – is locked in a car about to be squashed into a giant Oxo Cube.

So what is the big appeal of scrap dealers for scriptwriters? Marston Bloom has set stories in breakers’ yards for New Tricks and ITV’s Vera.

“Ever since I became a writer I wanted to use my friend’s yard in a plot – because it is visually fantastic and because any yard would seem to contain a myriad of stories,” he says.

“They’re private kingdoms hidden from view and lend themselves very well to crime drama. All sorts of nefarious activity can go on behind their bolted gates – murder, torture, extortion, abduction – and, of course, any amount of drugs and firearms can be stashed there.”

How do real scrap men feel about their on-screen counterparts?

In some cases, concedes Ged Salt, who ran a breaker’s yard for 25 years, there can certainly be a grain of truth in them. He also says that in reality a bad reputation can be beneficial, even for honest dealers, because their customers can be quite unsavoury.

“Some pretty unscrupulous people come on to scrapyards, and if they think you’re soft, you’re not going to last very long,” he says.

“Everybody wants something for nothing. It’s always been a cash business and people are looking to steal from you most of the time, even if it is just your wallet.”

Salt was stabbed by one customer and badly beaten up by another. “It could’ve happened on any day,” he says.

On another occasion he bought a car in good faith. It came with the correct documentation and – he later discovered – a gun. After he handed it over to the police, it transpired the car had been used in an armed robbery.

“It was a hard, dirty and dangerous job,” he recalls.

Scrapyards only really began to be regulated and licensed in the early 1990s, but since then much more attention has been paid by the government to what they handle, how they handle it, and their environmental impact.

Spurred on by the recent metal crime wave, new laws have also attempted to make it more difficult to sell metal of dubious provenance to a scrap dealer, or for them to buy it.

In England and Wales, they are banned from making cash payments and have to keep records for three years of who they buy from, including proof of ID and address.

The police have been given greater powers of inspection, and the penalties made stiffer. And all scrap dealers, collectors and motor salvage operators must now be licensed, a process which includes a criminal record check. Similar legislation is in progress through the Scottish Parliament, and Northern Ireland is also looking to strengthen its laws.

So are these laws a chance for this £5bn-a-year industry to clean up its public image?

Ian Hetherington, of the British Metals Recycling Association, welcomes them as an opportunity to finally rid the trade of its “Steptoe and Son stereotype”.

He adds that the UK is in the world’s top three exporters of recycled metal, and that we have “major businesses operating on an international scale”.

“They make a significant contribution to our economy, and help the UK reach the EU’s environmental recycling targets.

One company that sees itself more in the modern mould of a recycling business is Autospares in Northamptonshire. Julie Mitchell’s family firm has been trading for nearly 35 years and she thinks the scrap industry has changed unrecognisably in that time.

Technology changes so quickly – our next challenge is how to break hybrid vehicles she says. Her firm has an online presence, offers a readily available product and works cleanly in a concreted environment.

She would like to see a better press and a more modern portrayal of the industry. But I think people are coming round to it slowly

As Bloom elegantly suggests, maybe it’s time to find a new visual vernacular for crime drama Then the law-abiding vast-majority of scrapyard owners can get on with their work without fear of stereotyping.

Like my family  they’ve never put anyone in the crusher.

Related Topics:ascriminalsdealersportrayedscrapWhy are
Up Next

Beheading will not intimidate US